Today’s blog post will be Part 1 of the last-minute NaNoPrep I’m frantically starting a week before November 1st.

Here’s some things I’ve done that I highly suggest:

Complete with Two Steps from Hell, Audiomachine, LOTR soundtrack, and a touch of Hamilton, I have a playlist titled “NaNo2016.”  Also there might be a couple of Disney songs.  I mean, “Go the Distance” from Hercules, and “I’ll Make a Man Out of You” from Mulan seem appropriate for a month of noveling craziness.  You can check it out here if you’re interested.

2.  Get to Know Some Characters/ Places.

I may or may not have created Pinterest Boards for some of my characters.  And my main setting.  Ooopsy.  It’s actually pretty awesome, because now I can visualize them.  Being able to see characters dress is one of my favorite prep mechanisms.  Also, Pinterest is an amazing way to procrastinate when you have homework due in a few short hours. 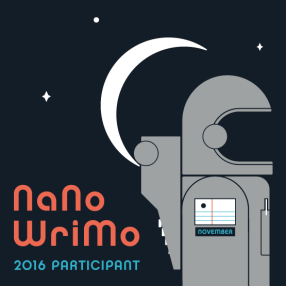 NaNoPrep Part 2 will be coming later this week.