This week was a momentous occasion for me as a writer.

I sent out my first query letter to a real-live, actual agent.

It’s an incredible feeling, having a novel that I feel ready to share with a professional.  Having a query letter that explains what happens.  Having taken that first baby step out into the world of actually publishing.

I soon found myself getting really excited.  The more query letters I send out, the better chance I have of getting an email someday asking for a partial- or full- manuscript.  Someday I might actually get PAID for all the hard work I’ve put into this novel.  Wow.

Now, to be realistic, this probably won’t happen for a while.  One blogger buddy I follow has an outstanding MS, a delightful query letter, has been submitting for many months, and has come up empty (even after several full-MS requests).  So obviously I’m not trying to get my hopes up too much.  But it’s fun to dream.  To speculate.  To hope.  To reference Doctor Who: 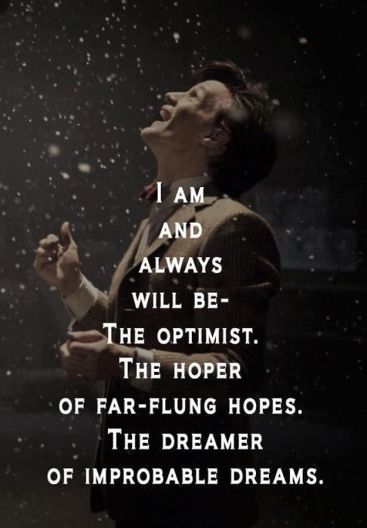 I think that far-flung hopes and improbable dreams are beautiful things, and that they are part of what motivate us to try harder, to push ourselves, and to achieve success.

But on the other hand, I can hear Albus Dumbledore echoing through my mind:

So even though I’m really, truly excited for the slight possibility that today could be the day I hear back from an agent, I’m not consumed by that.  I’m trying to balance.

Because honestly, my first three pages of my novel could be a little tighter.  My query could be a little more captivating.  Oh, and I have another book that’s in my heart, burning to be set free onto the page.  So my goal is to dream my improbable dreams and let them be my guide, but not lose sight of the work in front of me.

And that, my friends, is something that every writer – every person who wants to accomplish great things – must learn.

Part of this blog is about the sharing of information.  The writing community is all about looking out for each other and helping each other out, so while I’m on the subject of querying, I’d like to share two amazing resources I came across this week:

While I was looking around for more agents and agencies, I discovered this agent who posts critiques of query letters that people submit to her for suggestions.  Yes, you heard right.  An actual, legit agent reviews of actual query letters.  Link here.

2.  A Beautiful Catalog of Agents

I’ve run across several catalogs of agents (basically where you can search by agent by genre or other criteria).  My favorite thus far is http://www.aaronline.org/ because it’s clean, easy, and fast.

Whether you’re writing a first draft, editing, or querying like I now am, don’t quit.  Don’t give up.  Keep dreaming, keep working hard.  Being a writer isn’t easy, but it’s worth it.

At first I thought about writing an in-depth explanation of what makes a good query letter.  But I soon realized that this was a terrible idea because 1) it would be exceptionally boring, 2) all of that info is already on the web about a million times over, and 3) I am not an expert at all, so why should I tell you how to do it?

Instead, here’s the process, the steps of writing a query letter.

Spend at least a week procrastinating everything related to querying and agents out of sheer fear and trepidation.  Writing a query letter is [hopefully] that first baby step into the world of being published, so the thought of starting is… well, scary.

Google.  A lot.  Read about twenty different articles telling you “how to” and “how not to” write a query letter.  What to include and leave out.  What to say and how to say it.  Next, read some sample queries, get a feel for the flavor and tone of them.  This step usually leads to a bit more panic, but that’s normal.

Take a deep breath, and bleed onto the page.  Not literally.  But it feels a bit like death, trying to condense a 68,000-word novel (that contains a piece of your soul) into an 200-word query.  Once it’s finally done, and you’ve eaten too much chocolate and shed some tears (again, not literally), then you are ready to share it.  But not with agents yet.  Oh no.

Step Four – Get it Critiqued.

This is why I love Critique Circle — there is a forum dedicated to query- and synopsis- critquing.  So, you finally get up the courage to post your freshly-written query onto the forum, and then you nervously await responses.  Emphasis on the nervous part.  If you’re not part of CC, you [hopefully] get it critiqued by other people elsewhere.  Your friends, parents, writer buddies, that lady who works at your college writing center… you get the idea.

You asked them to tear it to pieces, and they did.  So you go back to the drawing board — er, keyboard — and totally start over.  You see it improve, and it’s better, and oh look it’s actually not horrible now.

Repeat Steps Four and Five Indefinitely.  In the meantime, continue to research query letters, and also give critiques of other people’s queries!  It’s a sure way to help you get better at writing your own.

That list of agents you’ve piled up?  Start submitting.

And then turn on Netflix, have a Lord of the Rings marathon, watch all of Classic Doctor Who, or, uh, start editing your next novel, because there’s a long wait after step six.  A long wait with a lot of tears (actual tears are possible with this stage), and usually lots and lots of rejection.  But there’s a light at the end of the tunnel!  A long, dark, smelly tunnel dripping with water, but a bright light at the end.  In the meantime, you’re writing the next novel, dreaming the next dream, furiously typing away at your keyboard, pouring your soul into another story.  Because you’re a writer, and that’s what you do.

Let me know in the comments what your experience is with query letters.  Or your thoughts on the new Star Wars movie.  Or on Classic Doctor Who.  Or whatever.

When I brought my gorgeous, newly-printed MS with me to my Teen Writer’s Club meeting, I immediately got asked the ultimate question: “Do you think you’re going to publish it?”

My honest response was “Maybe. I don’t really know.”

But I’ve been thinking… and I at least want to see how hard it would be.

So.  Yesterday I did something radical.  I Googled “Literary Agents.”

For those of you who aren’t savvy with Publishing-World Lingo… An Agent is someone who agrees to represent your book to publishers.  They will get your book “published” for you and will take a cut from the royalties if it sells.  They basically guide you through the process, so a lot of people start their publishing journey by finding an agent. An alternative method is to submit queries directly to a publisher, but there’s some downsides to this.

So, I hit “Search” and was instantly overwhelmed.  Today, however, I found a cool site called AgentQuery.  I then opened a Google Spreadsheet and started filling in some info.  After about two hours of work, I have ten agents listed, complete with their full name, agency, email, and what they require when you send in a query.  Some only want a query.  Some also want a synopsis.  Some want the first ten pages, or the first three chapters.  It varies from agency to agency or even agent to agent, so now I have this nifty spreadsheet with the first ten agents I will query to.

I can hear the objections forming in your minds.  They’re practically bursting out your ears.

So, perhaps I have the cart before the horse a bit.  HOWEVER.  Part of me just wanted to know how hard it would be to find some agents that would be query-worthy.

In that case, why not try to get published?  What do I have to lose?  (Okay, a lot of time and effort, but we won’t talk about that.)

Magical Realism: where reality is infused with magic in such a way that it is normal.  According to the Goodreads definition, “The story explains these magical elements as normal occurrences, presented in a straightforward manner that places the “real” and the “fantastic” in the same stream of thought. ”  This would be different from books like Harry Potter, where the magic happens in this world but is hidden from most people.

Boutique Agency.  Also, in typing out those words, I learned that Boutique has two u‘s in it.  Who knew?  Anyways, while I couldn’t find a proper definition, I kindof gathered that it is a fancy way of saying a “small agency.”  Let’s just say that the agencies who claimed to be “Boutique” tended to have three agents or less.

Expect a lot of silence.  And maybe some rejection.  But mostly just crickets chirping in the background.  And also lots of waiting.  Most agents’ websites say that the wait time is anything from four weeks to about two months.  So lots and lots and lots of waiting.  Oh, and if they come back and request a partial, then you wait another few weeks/months.  And if they request a full MS, then it’s a few more weeks.  And then if they agree to represent you, it’s more months before they find you a publisher.  And more waiting after that.  Waiting and waiting and waiting and waiting.

I’m not sure there was really a point to all of this.

Okay, here we go… THE POINT TO ALL OF THIS:

Yes, it’s a lot of work to try to get something published.  It’s a long road with a lot of steps and a ton of time and effort.  But it’s NOT impossible, and it’s not too hard to get started.  So if you’ve got a great MS, all it takes to get yourself started is a simple Google search.